Translating your document in Haitian Creole helps narrow the gap in communication by ensuring that your Haitian audience can understand messages and information in their language. It is equally important to use a professional Haitian creole translator who has expert knowledge of Haitian creole vocabulary, grammar, and orthography.

Although over 80 percent of the Haitian creole vocabulary derives from the French language, there are notable differences in the meaning of words that sound similar. Also, the two languages have distinct grammatical structures and writing systems.

The French colonizers of Saint-Dominque spoke a classical French type known as langue d'oïl in the 17th and 18th centuries.

Although over 80 percent of Haitian vocabulary has its origin in the French language, many of these words come from the classical French from the colonial period.

Words that had a single meaning in the 17th century have changed or been replaced in both languages.

For example, the old French word bailer, or to give in French, has not been used in French since the end of the 17th century. Today, the Haitian Creole word bay still means to give.

Despite their remarkable apparent similarity, the Haitian Creole and French lexicons contain several "false friends." They may be identical or remarkably similar in their pronunciation but have different meanings.

Haitian Creole has its distinct grammatical structure. The conjugation of verbs, the pluralization of nouns, and the agglutination of articles are just a few of the distinctions that make Haitian Creole different from French.

In Haitian Creole, the verb form does not change according to the subject. Instead, we use markers to place an event in the correct temporal setting.

Agglutination of articles in Haitian Creole

From our previous examples, you may have already noticed a significant difference in spelling. The Haitian creole writing system is based on the Haitian Creole alphabet. Unlike the French alphabet, with 26 letters, the Haitian alphabet has 32 symbols representing 32 distinctive sounds. It employs a consistent one-sound, one-symbol correspondence. That means the same sounds in French and Creole are written with different letters. Therefore, someone who speaks one language won't necessarily be able to read in the other language.

Translate your documents into Haitian Creole

Because of these differences, documents for Haitian readers should be in Haitian Creole. It's equally important to use a professional Haitian creole translator with expert knowledge of Haitian creole vocabulary, grammar, and orthography.

Want to learn more? Be sure to download our e-book “What Clients Need to Know About Haitian Creole Translation” by clicking here. 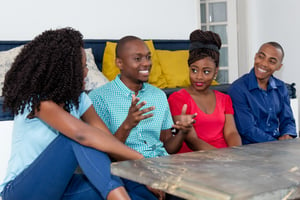 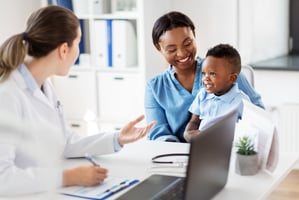 Ask us Anything: Answers to questions about Creole translations